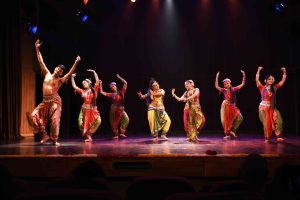 Bachan, a senior disciple of the illustrious Ranjana Gauhar, stands tall among Odissi exponents. He is a former scholarship holder from the Indian Council for Cultural Relations (ICCR) and an empanelled artist of ICCR and the All India Dancers Association. With his vibrancy, confidence and graceful dance, Bachan will set the stage alive with his performance on choreography ‘SUTRA’ under the guidance of Ranjana Gauhar.

Ranjana Gauhar said, “For kevin Dance is beyond the physical….it is a spiritual connection with the divine.“

Vinod Kevin Bachan said, “Sutra- as a presentation was given birth by my Guruji, her support, love and care throughout this journey of creating this event is unfathomable.“

In all, he has performed two choreographies:

Vinod Kevin Bachan stepped into the world of Odissi dance at Nrityanjali theatre in Trinidad and Tobago West Indies as a child. He initially made his journey to Odisha to study this timeless art form under the Deba Prasad Das style of Odissi in Bhubaneswar for two years. As of now, he continues to get training from his Guru Ranjana Gauhar. He has performed on various platforms in India and abroad and has received various awards and positive critiques for his performances. Bachan has also traveled to many countries such as Grenada, Barbados, the UK, Malaysia, and Brazil, and has received various awards including Natya Mayaurm, Tarana Yuva Puruskar, Kala Shriumoni Award and Bharata Shastra Nritya Praveena and Nritya Shirmonai Samman. Recently, Bachan received the Ustad Bismillah Yuva Puruskar for the year 2021. He has also received a scholarship under the Ministry of External Affairs – Indian Council for Cultural Relations.

Bachan has been the lead character in many of Ranjana Gauhar’s productions such as Matsya Avatar, Chitrangada – The Warrior Princess, Khud Mein Kabir – Kabir Mein Hum, Om Namah Shivaya and Jhansi Ki Rani. He is also one of the lead dancers and one of the senior teachers in Utsav. Under his Guru’s guidance, he has also composed solo productions such as “Bhoomi-Suta” and “Rasa Rang” along with a few thematic solo presentations such as “Arghyam,” “Nayika Ke Manobhaav” and “Bhakti-The pathway to God.”

Padmashree Ranjana Gauhar is a world-renowned Odissi dancer, writer, filmmaker and choreographer, and figures amongst the most distinguished exponents of this art form. She received Padma Shri in 2003. Gauhar is the artistic director of Utsav’s repertory which is well known for its high standards of excellence and has performed widely in India and Abroad.

Read Time:54 Second
The Business Daily
On 2 years Ago

‘Under the Sal Tree’ theatre festival gets underway at Rampur

Read Time:1 Minute, 57 Second
The Business Daily
On 2 years Ago

‘The Immortal Ashwatthama’ to go on floors in April 2021