Two days after leading Argentina to their third FIFA World Cup trophy with a victory over France in the final at the Lusail Stadium in Doha, Lionel Messi is still setting records. After the World Cup victory, he posted on Instagram with the caption “CHAMPIONS OF THE WORLD!!!!!!!,” which has now received over 56 million likes. On Instagram, it has received the most likes. Messi’s post surpassed “World record egg,” which has a little less than 56 million likes, in terms of engagement.

Monday, Messi’s message had become the most liked post by a sportsperson. It overtook a post by Portugal’s Cristiano Ronaldo, that showed the superstar playing chess with Messi, which has got over 42 million likes as on on Tuesday afternoon.

In  the post, Messi wrote: “So many times I dreamed it, so much I wanted it that I still don’t fall, I can’t believe it…… Thank you so much to my family, to all who support me and also to all who believed in us. We prove once again that Argentinians when we fight together and united we are able to achieve what we aim. The merit is of this group, which is above individuals, is the strength of all fighting for the same dream that was also the one of all Argentinians… We did it!!! LET’S GO ARGENTINA DAMN!!!!!  We’re seeing each other very soon.” 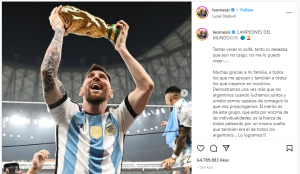 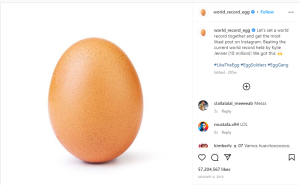 Messi finally crowned his record-breaking career with football’s biggest prize as he produced one of the greatest World Cup final performances, scoring a first-half penalty and netting again in extra time.

France had fought back from 2-0 down in the last 10 minutes of the match as Kylian Mbappe scored twice to equalize and force extra time in a pulsating match watched by an 89,000 crowd in Lusail Stadium.

Messi seemed to have decided the match in extra time with his second goal of the game before his Paris Saint-Germain teammate Mbappe completed only the second World Cup final hat-trick in history to bring the score to 3-3 and force penalties.

Gonzalo Montiel swept home the decisive spot kick to win the shootout 4-2 for Argentina — but this was Messi’s moment.

Read Time:59 Second
The Business Daily
On 1 year Ago

Read Time:3 Minute, 8 Second
The Business Daily
On 2 years Ago

Read Time:1 Minute, 43 Second
The Business Daily
On 2 years Ago

Read Time:1 Minute, 30 Second
The Business Daily
On 2 years Ago

Read Time:1 Minute, 47 Second
The Business Daily
On 2 years Ago

Read Time:1 Minute, 17 Second
The Business Daily
On 2 years Ago

Salman Khan has started shooting for Pathan with SRK