With one million Twitter followers, the Reserve Bank of India has become the first central bank in the world to reach this milestone.

The Reserve Bank of India (RBI) has beaten the US Federal Reserve and European Central Bank on Twitter by emerging as the most popular central bank on the microblogging site with one million followers.

As per the latest information available on the RBI’s twitter handle ‘@RBI’, the number of followers has increased from 9.66 lakh on September 27, 2020 to one million or 10 lakh. 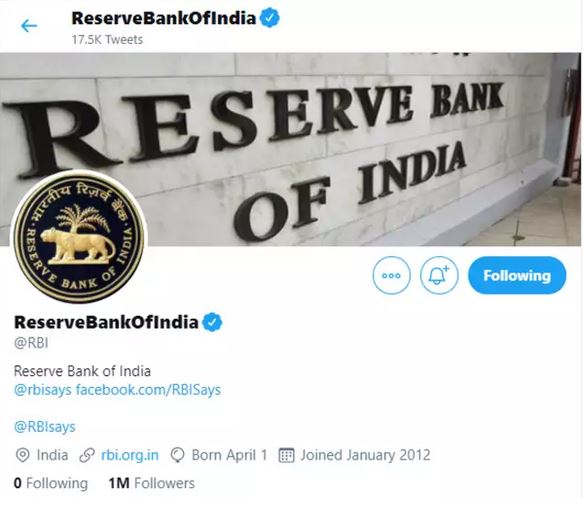 “RBI Twitter account reaches one million followers today. A new milestone. Congratulations to all my colleagues in RBI,” Governor Shaktikanta Das said in a tweet on Sunday.

In contrast to this, the world’s most powerful central bank, the US Federal Reserve, has only 6.67 lakh Twitter followers and the Frankfurt-headquartered European Central Bank (ECB), the second most powerful monetary authority in the world, has 5.91 lakh followers.

US Fed joined Twitter in March 2009, while ECB has been active on the microblogging site since October 2009.

During the ongoing seven-week lockdown that began from March 25, the number of followers has increased by more than 1.5 lakh, an official said.

In the current financial year, as many as 2.5 lakh new followers joined the handle.

Besides, its main Twitter handle, RBI has another Twitter account called ‘RBI Says’ and also started a Facebook page with the same name in early April. At that time, it also launched a customer awareness campaign to prevent gullible account holders from being duped by fraudsters.

Read Time:34 Second
The Business Daily
On 2 years Ago

Read Time:4 Minute, 7 Second
The Business Daily
On 2 years Ago

Read Time:2 Minute, 15 Second
The Business Daily
On 2 years Ago