India’s petrol consumption grew for the first time since February in September, with diesel demand also recovering month on month, according to data released by the government’s Petroleum Planning and Analysis Cell. The petrol consumption last month, at 2,450 thousand metric tonnes (TMT), was even higher than for the corresponding period in 2019.

However, while diesel consumption rose to 5,489 TMT, as much as 13.2% higher as compared to August, it was still 6% down as compared to September 2019. Fuel consumption in India collapsed after the government announced a nationwide lockdown on March 25 to combat the spread of the novel coronavirus. 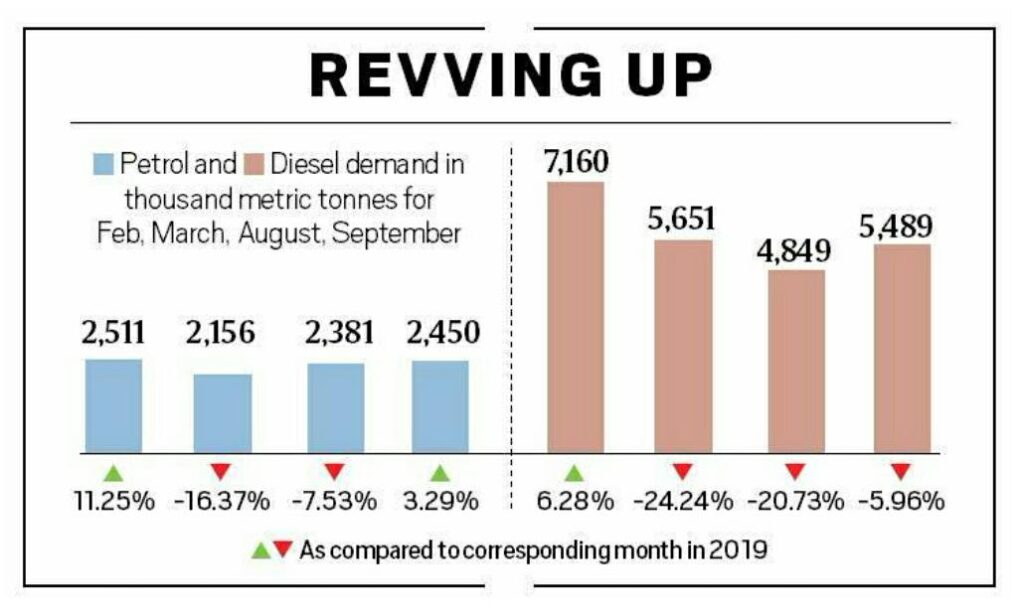 Demand initially recovered steadily following the lifting of the restrictions but stalled after June, when state and local government began imposing local-level lockdowns.

Experts said preference for personal means of transport to avoid infection seems to be behind the petrol sales rising to pre-Covid levels. “Petrol is only used for transportation so it has seen a sharp recovery, with people increasingly opting for personal mobility, but diesel is also used for agricultural and industrial purposes besides transportation, which have seen lower consumption,” said Abhijit Bora, analyst at Sharekhan, BNP Paribas.

Bora also noted that the demand for diesel usually falls during the monsoon every year, and that the recovery to 93% of pre-Covid levels was, in fact, “phenomenal” given the economic scenario. India’s GDP contracted by 23.9% in the quarter ended June and the RBI has forecast a contraction by 9.8% in Q2 FY20.

Executives at oil marketing companies have said that they expect the diesel demand to return to pre-Covid levels by November-December.

Read Time:1 Minute, 18 Second
The Business Daily
On 2 years Ago

Industry fair will focus on business in new normal

Read Time:31 Second
The Business Daily
On 2 years Ago

Read Time:42 Second
The Business Daily
On 1 year Ago

Read Time:2 Minute, 15 Second
The Business Daily
On 2 years Ago